Set-Up: Anne Marie (Kate Bosworth), Eden (Michelle Rodriguez) and Lena (Sanoe Lake) live to surf. They share a small house on Oahu and work as housekeepers in one of the local luxury hotels so that they can finance their passion. Using all their combined resources, they’re barely making ends meet.

As the film opens, Anne Marie is on edge.  Based on her amateur ranking, she’s one of the first women invited to participate in the macho North Shore Pipeline competition.  She knows it’s a make-or-break event for her.  If she does well, she may be recruited by one of the professional teams.  So she’s training as hard as she can, but flashbacks of a prior wipe-out drain her confidence.

One day at work she goes over the edge and she’s fired.  Eden and Lena want to walk out with her, but she convinces them to stay.  They all know how much they need the money, so Anne Marie is suddenly left alone while her buddies go back to the daily grind.  With time on her hands and bad memories on her mind, Anne Marie is ripe for trouble.  Enter Matt, the hotel guest who just happens to be a handsome quarterback.

Analysis: Blue Crush is based on an article by Susan Orlean called “The Maui Surfer Girls” which was originally published in the Fall 1998 issue of Outside Magazine.  You can read it for yourself in Orlean’s recent collection The Bullfighter Checks Her Make-Up. In 2001, Orlean was asked to deliver the Johnston Lecture for the University of Oregon’s School of Journalism and Communication.  The title of her lecture was “Finding the Extraordinary in the Ordinary: Writing about Everyday Life.”  Asked “What is it about so-called ordinary people that attracts you as a writer?,” she replied as follows:  “Writing about ‘ordinary’ people is about following my own curiosity. After doing celebrity journalism, I realized I was more interested in the things I walked past every day, the stuff people usually miss. I’m primarily interested in the tiny master — a person with a tiny domain over which they are the master. I wrote a piece about a New York City cabdriver who is also the king of the Ashanti tribe in America. After that experience, I realized — you never know. Any other cab driver I meet, any ordinary person, could be a king. It made me step lightly.”

This quote tells me more about Blue Crush than anything I’ve read in the dozens of reviews I’ve read since the film opened.  Anne Marie (Kate Bosworth) is, indeed, a tiny master – someone who is very good at what she does, someone who is most alive when she’s doing the thing she loves, and someone who spends her days cleaning other people’s #$&% (literally) so that she can prove herself on the Pipeline. 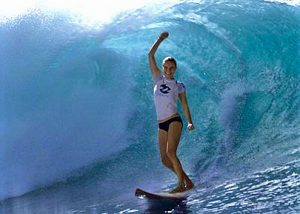 It falls to screenwriter Lizzy Weiss and director/screenwriter John Stockwell to place Anne Marie in a coherent, engaging setting.  They take the frame from Orlean.  Anne Marie lives in a Hawaiian paradise lush with natural beauty, where the economy is almost totally dependent on tourism.  Our 50th state resembles a third world country: adult women have lots of children, low wage jobs, and almost no adult male support.  No wonder a talented girl like Anne Marie wants to live on the waves as long as she can.  Orlean puts it this way:  “I spent a lot of time trying to picture where these girls might be in ten years…  Maybe these girls are still young enough and in love enough with their lives that they have no special foreboding about their futures, no uneasy presentiment that the kind of life they are leading now might eventually have to end.”

For dramatic purposes, Stockwell and Weiss have made their surfer girls a little older.  They are on the cusp.  Whenever Anne Marie slacks off, Eden (Michelle Rodriguez) is there to remind her about what’s at stake.  They also create a “love object” (Matthew Davis) to give the film some romantic zing, and add complexity to their heroine’s choices.  To keep it light, they’ve made the arc of the plot conform to a typical sports story: great expectations followed by fear of failure followed by triumph.

Personally, I have nothing against genre movies, but I think their success depends on all the little details that flesh out the shell’s more predictable elements.  In this case, with Orlean’s acute eyes and ears to guide them as well as Brian Grazer’s powerful Hollywood muscle to smooth their way, the filmmakers have created a winner. (Grazer is an Oscar-winning producer, an avid surfer, and the father of a 13 year old daughter.)  In a summer in which accomplished actresses like Jennifer Jason Leigh (Road to Perdition), Frances McDormand (City by the Sea), Frances O’Connor (Windtalkers) and Franka Potente (The Bourne Identity) were all given “play-doh” parts, Stockwell and Weiss even took the time to create a genuine backstory for their hunk. (Listen for how Matt explains his ability to put a special spin on a football).

Do I believe the ending?  Let’s put it this way.  Like millions of people around the world, I watched the Olympics on February 21, 2002.  We were all expecting to see Michelle Kwan finally win her gold metal for figure skating, but what we all saw instead was Sara Hughes on the ride of her life.  So, yes, I’m a believer!

Conclusion: Blue Crush has everything: an interesting story about a little-known subculture, exciting visuals, and a propulsive soundtrack.  What’s more, the story it tells is both timely and important.  The film opened on August 18, 2002.  On September 5, 2002, The New England Journal of Medicine released a major study demonstrating precipitous decline in physical activity for adolescent girls between ages 10 and 16.  Girls need more images of healthy, strong female bodies. They need more stories in which girls compete against the elements and prevail over their inner demons.  And we all need more films in which creative artists like Susan Orlean and Lizzy Weiss are encouraged to express uniquely female points of view.  Any film that can sell an important message with both energy and empathy gets kudos from me! 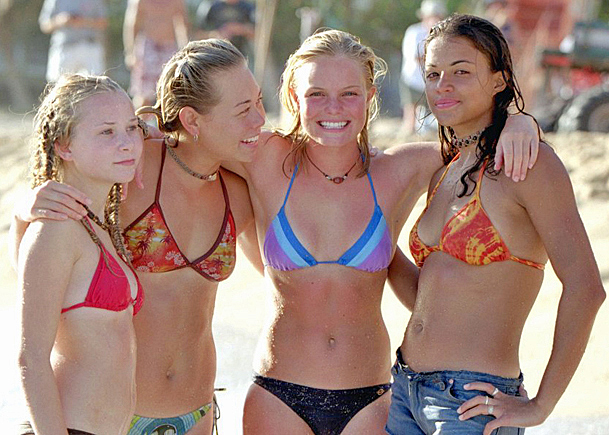