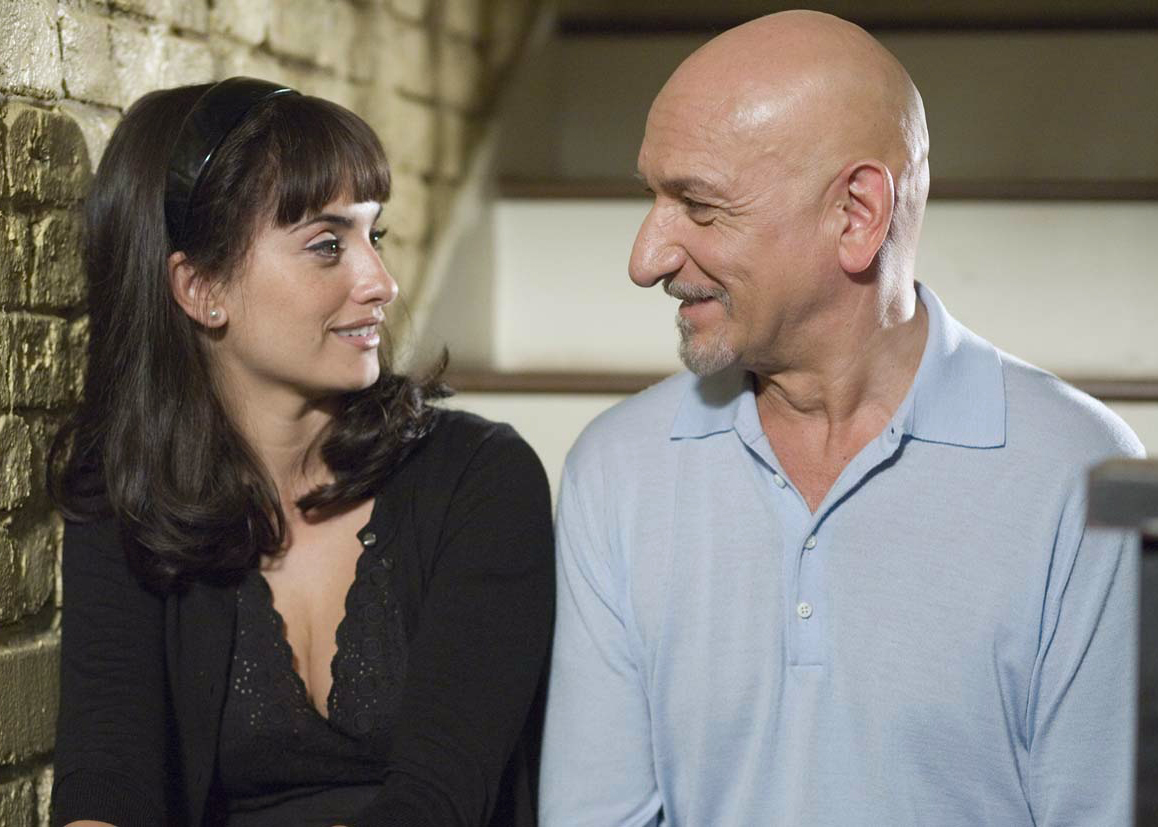 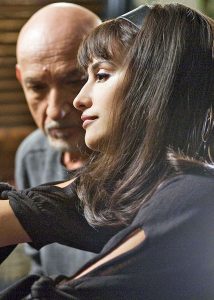 New adaptation of Philip Roth’s novel “The Dying Animal” (helmed by Isbale Coixet & scripted by Nicholas Meyer) succeeds in capturing the author’s humanity.  Excellent cast is headlined by Ben Kinsley as “David Kepesh” (a serial seducer who becomes obsessed with a beautiful young woman) and Penelope Cruz as “Consuela” (someone longing for safe harbor after disappointments of her own).  Dennis Hopper is cast against type as the buddy who seems to walk lightly around the edges of Kepesh’s life, but who is actually the one who helps keep him connected. (JLH: 4.5/5)

Something wonderful has happened to Philip Roth’s career in the past decade, and I don’t just mean the fact that he’s continuing to publish novels that are both critically acclaimed and financially successful well into his senior years.  As a film critic (a film critic born and raised in the Weequahic section of Newark, NJ!), I’m delighted to report that he’s finally found filmmakers looking for the humanity in his work and not just the misogyny.

When The Human Stain was released in 2003, it landed in the number two spot on my yearend “Ten Best” list, and I still think it’s a terrific example of a film that’s better than its source book.  (For more on this, see comments below.)  But good as The Human Stain is, I think Elegy, based on Roth’s 2001 novel The Dying Animal, is even better.  This time Lakeshore Entertainment–the producers of The Human Stain–have placed screenwriter Nicholas Meyer’s latest adaptation in the hands of Spanish director Isabel Coixet, and her stitching is seamless.

Elegy is the story of Public Radio guru “David Kepesh” (Ben Kingsley), a man-about-town who still does some teaching and some writing, but who no longer has any interest in serious scholarship.  He’s certainly Jewish, but his life has no visibly Jewish elements, and his role as a public intellectual doesn’t tilt him in any way towards overtly Jewish themes or topics.

As the film begins, Kepesh is living a sublimely unencumbered life: he owns a tastefully furnished home in Manhattan; he shares his bed with a beautiful but highly independent woman named “Carolyn” (Patricia Clarkson); and he keeps in shape by playing squash with his simpatico buddy “George” (Dennis Hopper).  Years before, Kepesh fathered a son and then left him to be raised by an embittered ex-wife.  Now the adult “Kenny” (Peter Sarsgaard) is filled with rage, so Kepesh is careful to maintain his emotional distance.  The ugly stories Kenny heard from his mother are all true, so why deny them?  Kepesh is a serial seducer, and his classrooms are the private feeding grounds of a shark on the hunt.

Then a new semester begins, in walks “Consuela” (Penelope Cruz), and all the air goes out of his inflated ego.  Consuela is reserved and elegant, and as soon as Kepesh succeeds in making love to her, he’s instantly obsessed by the thought that one day she will leave him.

This man, David Kepesh, I know this man very well.  I’ve met his type many times, at many different points in my own life.  As a feminist, I hate him, and as a Jewish feminist, I actively despise him… and yet… and yet…  By the end of Elegy, I found myself crying real tears for this man, a man terrified by illness and death, a man so afraid of being alone that he runs from every offer of genuine intimacy.

Coixet and Meyer both see into the soul of this man with great clarity, and Kingsley portrays their vision of him perfectly.  He captures every nuance, as the worm of self-doubt reveals itself beneath the erudite charm and the healthy, albeit aging, body.  Cruz, so loud and blowsy in recent films like Volver and Vicky Christina Barcelona, is appropriately introverted and refined here, and she’s just old enough to be the right onscreen age for this Kepesh.  She has little lines around her eyes that prove she’s no longer a girl, and prior love affairs now cast tiny shadows of melancholia across her otherwise luminous face.

Clarkson and Sarsgaard are both extremely good in their parts, but they always are, and this particular film doesn’t force either of them into new emotional territory.  Dennis Hopper, on the other hand, is cast against type, and Coixet turns him into a genuine mentsch.  I’ve just scrolled through his enormous profile on the Internet Movie Database, and I can’t think of another time Hopper has played a role as sweet-tempered and worldly wise as this one. To round out George‘s character, Coixet and Meyer have also crafted a small part for Blondie singer Deborah Harry (as George’s wife “Amy”), and brief as it is, her one scene with Kingsley creates an emotional launch pad for the film’s final act.

The critic who saw this film left the screening room a better woman, someone with just a bit more compassion and insight, someone with more respect than ever for the artist who fights mano-a-mano with the grim reaper and wins.

© Jan Lisa Huttner (7/22/08) — This review was originally written for WomenArts (aka Fund for Women Artists) and is posted here with their permission.

“I read The Dying Animal like six years ago, and when I read it, I remember thinking: ‘Wow, some filmmaker is going to make a movie of this book, but it’s never going to be me.’  Then six years later, I knew Penelope [Cruz] really wanted to do it, and then I got the script.

This is a very risky subject.  It’s an old man and a younger woman…  Okay, I know it’s a very classical thing in theater and literature, but you have to be careful.  You have to be delicate.  You have to be intelligent, and the script was really good.  Since I was really scared to do it, I thought: ‘I’m going to do it!’

I began to think: ‘Okay, I know this man.’  Then I spoke with Ben Kingsley and we had a very, very interesting conversation about love, life, the past, the fear of dying, the fear of getting old, the way older men walk in the streets with younger women and how these younger women sometimes are wiser and more intelligent and more integrated than the men, and from that moment it was clear I was going to do it.  It’s a very physical film, in terms of how men talk, how they touch, how they interact, how they walk.  Ben [Kingsley] and Dennis [Hopper] had never met before – but the moment they sat down in that café, it was forever.

I have all these interviewers asking: ‘How can you a direct a film of misogyny?’  Well, you know what? I think misogyny is in the air we breathe!  As a filmmaker, I admire Philip Roth.  I think he’s a hell of a good writer, and some of his characters are misogynists, yeah, but I don’t think his point of view is misogynist because you feel sorry for David Kepesh.  Okay, he’s really into tits, yes, so?  Kepesh obviously admires Consuela’s breasts, but also he’s trying to make her a beautiful object, and that to me makes him less smart than he thinks he is.  The object outlasts the subjectivity that created it, not just the subjectivity that admired it!” 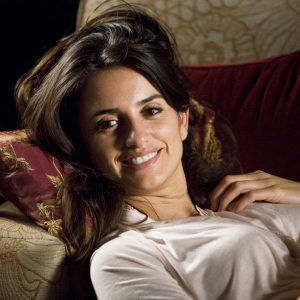 Although I cover all Jewish culture topics in my monthly JUF News column “Tzivi’s Spotlight,” I think of myself primarily as a film critic.  Therefore, when I know (or guess) that a filmmaker is interested in adapting a specific novel for the screen, I make a personal vow NOT to read the book until I’ve seen the film.  The simple truth is that even an unsuccessful film typically has an audience that is larger – often by many magnitudes – than the readership of a best-selling book.  So I want to judge the material as most of my own readers will: film first.

As I already said in my review (above), I think The Human Stain is a terrific example of a film that’s better than its source book.  When John Irving, adapting his own novel, eliminated the “Melony” character from his Oscar-winning screenplay for The Cider House Rules, it was a necessary cut, but I’m sure it was painful for him, and I know for a fact that many readers missed her.  On the other hand, I think director Robert Benton was extremely wise to ignore all the venomous pages Roth devoted to his caricature of Coleman Silk’s academic nemesis “Delphine Roux.”  The noxious Professor Roux has been respectably repackaged for the screen, and she appears defanged — embodied by classy-looking actress Mimi Kuzyk — in only one brief faculty meeting.

From the feminist perspective, The Dying Animal is blessedly short of misogynistic excess, and there was only one scene in the novel that made me sigh and put my book aside for a few minutes. Perhaps Coixet felt the same way, because there’s no hint of this scene in her film… 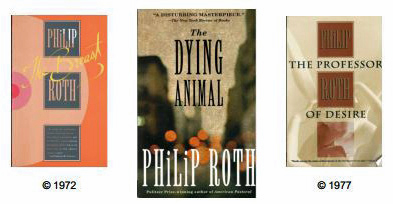 The Dying Animal is the third of Philip Roth’s three books about David Kepesh, but there’s a big gap between this one and the first two (The Breast and The Professor of Desire), and Roth never invested Kepesh with the diachronic dimensionality he’s lavished on his Newark-born alter ego “Nathan Zuckerman.” (Note that Zuckerman is the narrator of the Coleman Silk story Roth tells in The Human Stain.)

The Dying Animal is a first-person narrative.  Readers have no independent source of information about Carolyn, Consuela, George or Kenny; we only know what David Kepesh tells us, and everything he says about them inevitably comes from his own point of view.  In Elegy, on the other hand, all these characters come to life.

By and large, though, while they “speak for themselves” now, their essential character arcs all remain very close to the ones Roth originally created for each of them.

But there’s one beautiful bit in the film that is not in the novel. Kepesh is doing a live radio interview with an art historian, and their conversation is a perfect encapsulation.  It reminded me of the terrific line Meyer wrote for The Human Stain, when Anna Deavere Smith as young Coleman’s mother says to him: “I never thought of you as Black or White. Golden. To me, you were always my golden child.” I’m willing to bet that, come what may this November, Meyer’s line will reappear one day in a Barack Obama biopic. Maybe Wentworth Miller (who played young Coleman) is already working on it!

GRACE OF MY HEART 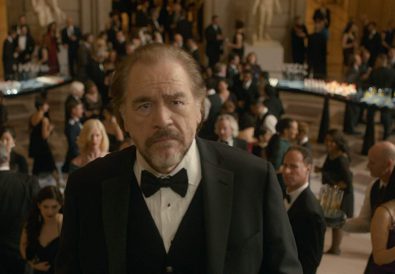 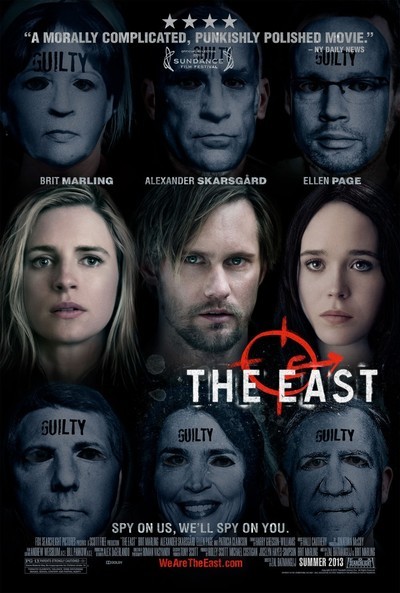