An Open Letter to the Women of AMPAS 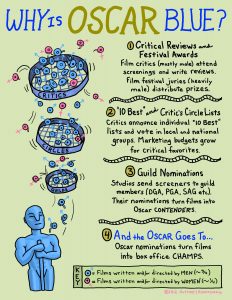 Why YOU should vote for The Hurt Locker

“The ‘cumulative’ factor of a series of pre-Oscar wins can be a powerful aphrodisiac for Academy voters.”  So says Pete Hammond of the LA Times, quoting “one producer and former studio head who told me he very much understands the psychology of Oscar voting.”

Yes, ladies, the handicappers will all tell you that your vote no longer matters.  They’ve posted their predictions, the dye is already cast, and they dare you to say otherwise.  But remember those great headlines from 1948: “Dewey Defeats Truman!”  We all know “it ain’t over ‘til the fat lady sings,” and this particular fat lady is still in mid-aria.

On what basis are the handicappers handicapping?  Do the prognosticators really know what you are thinking?

The “cumulative factor” is based on all the votes of all the people who have already voted, and people have been voting since early December.  I know this for a fact because I voted in early December (as a member of the Chicago Film Critics Association).

(To keep my sanity, I just assume that all the names I can’t identify, like LAFCA’s “F.X. Feeny,” belong to women.  In fact, “F.X. Feeny” is a man.  I just checked and found him on Google.  But I can’t check every name, so I’d rather overestimate than underestimate.)

What about the Guilds?  If you’re a DGA member, then you know better than I do who your fellow DGA members are, and ditto if you’re a WGA member.  But suffice it to say that in both cases, the pattern holds.  Well over 50% of both groups are male.

Right now, I’m not concerned with the whys and wherefores of this statistical distribution.  I just want to confirm what most of you already know: women are significantly underrepresented in most of the groups whose votes are combined to create the “cumulative factor.”  In other words, this “cumulative factor” primarily represents male opinion.

Facts like these used to be very difficult to find.  A few years back, I contacted the Hollywood Foreign Press Association and asked for a membership list.  No luck.  But after recent critiques by journalists like Sharon Waxman, the HFPA is now happy to post a membership list on its website.  And surprise, surprise, the current list is almost equally balanced between male and female members.  And this is how change happens: women must dig deep, question assumptions, and make our voices heard.

This year, there’s been a big rule change (from 5 Best Picture candidates to 10), so there’s a great deal of interest in “the rules.”  Handicappers can’t handicap if they don’t know the rules, so all kinds of information is suddenly a few clicks away.  For example, I recently learned from the Wall Street Journal that approximately 6,000 Academy members will vote this year, and approximately 1/3 of you are women.  Numbers like that make me smile.

Final ballots are due next Tuesday, March 2, at 5 PM (PT).  That’s a full week away.  So before you vote, I’d like to make one final appeal: forget everything you’ve heard, resist the “aphrodisiac” effect of the “cumulative factor,” and just vote with your heart for the films, performances, and technical accomplishments that you really believe are the best.  If you do, then March 7, 2010 might well be filled with surprises!

© Jan Lisa Huttner (2/23/10)–Special for Women & Hollywood (before conversion to the IndieWIRE network).

WomenArts film critic Jan Lisa Huttner blogs at www.TheHotPinkPen.com.  Her article on the 2004 Oscars for Women’s eNews (which showed how a record number of women directors and screenwriters had impacted the most high profile nominations) received the “Best News Writing for the Web” award from the National Federation of Press Women in 2005.

FYI, here’s the link to my award-winning article for Women’s eNews.  Credit for the chart goes to WeN editor Alexandra Poolos, because I originally created it at her request.  She was right! All the IWPA & NFPW judges loved it, & I’ve kept it updated ever since.  Sometimes one picture (like “BlueOscar” here) is worth 1,000 words, but other times only numbers will do 🙂

SOS for THE WHISTLEBLOWER