The way West told from the female POV: Michelle Williams stars as “Emily Tetherow,” one of three women placed in precarious circumstances when their menfolk decide to split off from the main wagon train & take a shortcut.

The year is 1845.  They’re on the Oregon Trail bound for the fertile Willamette Valley, but first they must cross the Cascade Mountains.  Their guide is “Stephen Meek” (Bruce Greenwood), a voluble mountain man who claims to know the quickest route.

Day after day they walk west, creating a tiny cloud of dust in a vast dry expanse, but the land around them stays relentlessly barren, hot, & flat.  Surely tomorrow they’ll see mountains in the distance?  But the next day is just the same.  They’re adrift in the high desert; no mountains & no water except what they’ve carried with them.

Gradually the men split apart.  While Meek sits by the fire, spinning yarn after yarn for Tommy, the three husbands debate their options.  Emily stands at a distance trying to catch snippets of what’s being said in the ever-tightening circle.  But she & the other women are inevitably excluded from the endless discussions in which their menfolk are engaged.

Although they’ve based their story on actual diaries from 1845, director Kelly Reichardt & screenwriter Jonathan Raymond have scaled events way down to an intimate (& far less-costly) tableau.  Instead of herds of thirsty animals, we get tight close-ups on the faces of three actresses who bring us into their reality.  When Emily finally decides to stand her ground, she stares Meek down & the heart soars. 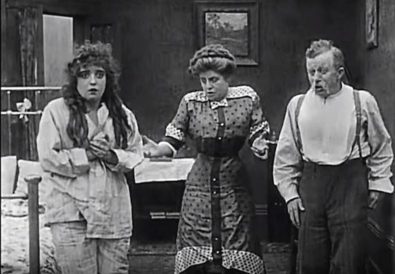 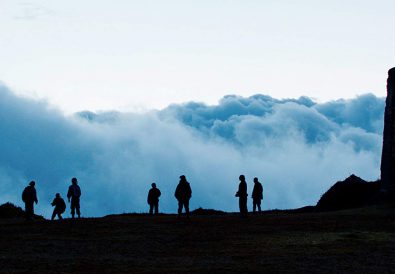