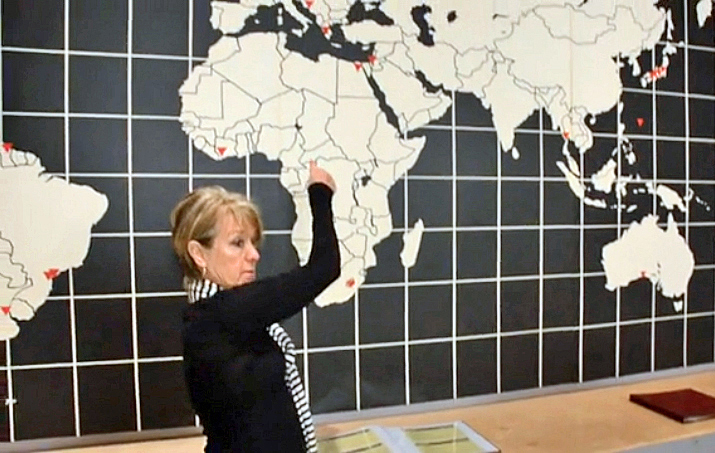 Way back on July 22, 2006 (a hot Saturday in Bloomington, IL), I was handed a press release from then Lieutenant Governor (& now Governor) Pat Quinn explaining that beginning in 2007, Illinois would celebrate “Jane Addams Day” every year on December 10.

In response, I began planning festivities for that date (12/10/07) with my fellow AAUW-Illinois Board Members, & me being me, I began searching for a suitable film. No one had anything… but someone at Women Make Movies told me she thought I should contact a California artist named Suzanne Lacy… She thought Lacy might have “something” for me… And now we all know that “something” was a very special film called Dinner at Jane’s.

So for all these years, I’ve been in contact with Suzanne Lacy (sometimes by phone but usually by e-mail), but now she is in Chicago for the Smart Gallery’s wonderful new Feast exhibit, & last night I actually met her f2f at Opening Night. To say it was “successful” doesn’t begin to describe it: it was SRO & a guy was counting everyone who left so that he could let in an equal number of people (& only that number of people)… waiting on a long line… in the rain!

So although I had my camera with me, I didn’t try to take a picture… But others did & here we are down in the far right corner. Richard (wearing the blue tie) is chatting with Russell Lewis (of the Chicago History Museum) & anyone who knows me will recognize my gesticulating hand in between them 😉

Brava, Suzanne! And so nice to finally meet you 🙂

Click HERE to read more about Feast in my JUFN interview with curator Stephanie Smith.