Colin and Mitch’s relationship dates back many years. They were once married to sisters. When the film begins, Colin, who was once married to the sister named Patricia, has just gone through a painful divorce from the women he married after Patricia died. Mitch, on the other hand, divorced the other sister long ago and now has an almost non-existent relationship with their four children.

Mitch tells Colin (who presumably hasn’t seen any of these kids for many years) that one is now gay and another married is to a Jewish woman, but the other two are seemingly normal (or something like that). Listening to Mitch being so dismissive about his kids is weird and slightly offensive. Did the filmmakers intend to make Mitch offensive (with the implication that being gay and/or marrying a Jew is something other than “normal”), or did they want to make him a stereotypical Southern “Good Old Boy”? Hard to be sure, but my teeth were on edge from that point forward.

Guilty for not attending Patricia’s funeral years back, Mitch tries to make up for lost time by inviting ex-brother-in-law Colin to his modern, beautiful house in Kentucky, then surprising him with plane tickets for an impromptu vacation to “get their groove back.” Although Colin cannot afford to go, Mitch explains that everything has been paid for; he already has two first class tickets, and all the arrangements have been made. So not having anything particular to do otherwise, Colin sets off with Mitch to Iceland.

During their trip, Mitch and Colin drink, eat, and have unsettling, inappropriate discussions about “broads.” But soon enough, their soft spots appear as Mitch opens up to Colin about his job status and what this trip really means to him. And Colin softens up too, as he remembers his life with Patricia: meeting her at the symphony, leaving music behind to become a bank manager, and leading a happy married life with her until her untimely death.

Despite the scenery (which is as beautiful as promised), Mitch and Colin’s escapades around Iceland — from cities to glaciers and from meadows to hot springs — become tedious, because these two men lack inherently interesting qualities. I waited and waited for a “big reveal” that never came and I left the theatre thinking Land Ho! was merely dull, without either the energy or will to be genuinely offensive. <insert BIG SIGH here > 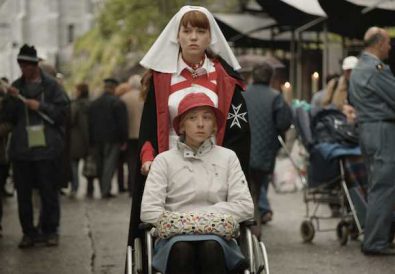