JLH Intro: Way back in August, I received an invitation from the North Shore (Long Island) Branch of AAUW. Would I be their January speaker? I said sure. They said the date was January 15th. I said fine. I put the date on my calendar and promptly forgot about it. Then, sometime in December, I looked at my January commitments, and suddenly realized January 15th would be the day the 2015 Oscar Nominations would be announced…

When I woke up on January 15th, I really, really thought that Amy Adams would be nominated for Best Actress for Big Eyes and Ava DuVernay would be nominated for Best Director for Selma. I was fully prepared to be a very happy camper. But neither of these things happened. So I thank my lucky stars for the wonderful ladies of North Shore (LI) Branch AAUW who helped me “process” all the emotions of the day. What follows is an edited transcript of my actual presentation.

The 2015 Oscar nominations are a sharp wake-up call about what is going on in the predominant image-making machine on this planet. The impact of women filmmakers on the 2015 Oscars is at its lowest point since 2004, and for the first time in this century, no women filmmakers — NOT A SINGLE ONE — have been recognized in either the Best Director category or in either of the two screenplay categories (Best Adapted Screenplay and Best Original Screenplay).

Since 2003, I have been tracking “Women’s Impact” on the annual Oscar Nominations. This year, there is a 4.65% impact, and these are the worst results since 2004. Here’s what I do: I take the top eight categories (Best Director, Best Picture, Best Adapted Screenplay, Best Original Screenplay, Best Actress, Best Actor, Best Supporting Actress and Best Supporting Actor), and I simply count how many women directors and screenwriters were employed behind-the-scenes to make nominations in these eight categories possible. Not just how many women directors and screenwriters are actually named nominees—this is always a small number and this year the number is ZERO—but what impact the women directors and screenwriters have on the top eight categories in aggregate.

There are also two women filmmakers who were nominated the Best Documentary category, Rory Kennedy for Last Days in Vietnam, and Laura Poitras for Citizenfour. Both of these docs are terrific, but the problem with both of them, and the problem with Selma – which is also terrific — is that there are almost no women featured in any of them. AMPAS — the Academy of Motion Picture Arts & Sciences — is sending a clear message: If you are a woman filmmaker and want your film to be a contender, then you have to make a film with no women in it. Remember The Hurt Locker, the film for which Kathryn Bigelow received the first Oscar ever given to a woman in the Best Director category? There were no women in that film. And if you do dare to make a film that has a woman in a lead role, like Gone Girl, then the female character has to be crazy. Is this what we want to see at the multiplex? More important: Is this what we want our daughters to see at the multiplex?

Let’s look at the eight films nominated this year for Best Picture. Here they are in alpha order with their Bechdel Test status. I also graded them “A” through “D” based on my own assessment of each film’s representation of women.

What explains this astonishing outcome in a world that is approximately 50% female? The answer most people give is that women don’t make enough movies, but that simply isn’t true. Women make a lot of movies, the problem is that most people have never heard of their movies and even fewer people have actually seen their movies. Why?

Here is a chart I did a few years back. Close examination of the Oscar-nomination process reveals that Oscar is not “gold” — meaning merit-based — Oscar is “blue,” meaning heavily dependent on male filters. Therefore, most films by and about women are eliminated from contention early on and very rarely reach the finalist stage.

On my chart, I show three stages in the winnowing out of films that might be contenders for Oscar nominations. The first level is critical reviews and film festival awards. Film critics, who are mostly male, attend screenings and write reviews. Film festival juries, also mostly male, distribute prizes. When a film festival jury has several members but less than half of them are women, it is almost invariably the case that the films by and/or about women won’t win the prizes. So films by and about women are bounced out at this first level, and the result is that their films get smaller promotional budgets and limited distribution, both of which result in low box office returns.

At the end of each calendar year, a new awards cycle begins. Individual critics announce their “10 Best” lists, and they also vote with their own local and national groups. Since most of these critics are men, male opinion dominates both the individual lists as well as the group lists. For example, I am a member of NYCFO (New York Film Critics Online), and approximately two-thirds of my NYCFO colleagues are men. What happens when these groups vote? There is a multiplier effect; the opinions of the male critics are consolidated — because their choices become the choice of the group — whereas the opinions of the female critics are washed out.

Now I need to be very clear here: I do not believe that all men think one way and all women think another way. I do not believe that men and women live on separate planets called Mars and Venus. We all live on Planet Earth. But I do believe that if all male opinions were plotted on a normal curve and all female opinions were plotted on a normal curve, there would be two different peaks. In the case of some films, my bet is that the two peaks would be very far apart, whereas in other cases, the peaks would be relatively close together. But there would almost always be two different and totally “normal” curves. I’m really not saying anything radical here. If I were, then we wouldn’t hear so much about “Gender Gaps” in every presidential election cycle, would we?

But there is another problem which is just as big: when people vote for something, they are implicitly voting against something else. I am willing to bet that of all the films written and directed by women released in New York between 1/1/14 and 12/31/14, my female colleagues probably only saw some of them, and my male colleagues probably saw very few of them. So most of my colleagues are in fact implicitly voting against films that they have never even seen.

Why haven’t most of my colleagues seen these films? Because most of them were made on shoe-string budgets, and they have limited releases. Unless the critical buzz is extraordinary, they don’t do well at the box office. Therefore the producers have neither the money nor the incentive to mount an awards campaign. So there are no year end screenings for critics, and no screeners sent to critics, and no “For Your Consideration!” ads in the industry press.

By the Guild nominations level, it’s a money race. If you have not reached the level of buzz needed to raise enough money, then your producers do not mount an Oscar campaign. And in the end, year after year we get more “Blue Oscars” = awards given by men to men.

After devoting myself to this problem for over a decade now, I sincerely believe that change begins at the box office. We must support women filmmakers. If we raise our voices, if we make a fuss, if we use our “power of the purse” to fight for positive societal change, we can do it!!!

NOTE: The “Stop Blue Oscar” campaign began to take shape immediately after I returned from the North Shore (LI) Branch Meeting. I contacted cartoonist Sharon Rosenzweig, who created this terrific logo (above), and I asked FF2 Associate Editor Brigid Presecky to create a TUMBLR site. Then Marti Sladek of AAUW Illinois created a “virtual event” on Facebook so we could spread the word via Social Media. We even created a “hasgtag” to track our “trend” = #StopBlueOscar.

As Nancy Reagan used to say: “Just say No.”

Of course, I would like you to spend the time watching either Selma or Big Eyes in a local theatre (if available), or do something else to support women artists. But the mere act of refusing to be dragged down into the 2015 Oscar Muck is sufficient.

My thanks to Dana Sinn for transcribing my lecture and to Brigid Presecky for helping to separate the wheat from the chaff.

We have “the Power of the Purse,” so let’s send a message to AMPAS: Stop Blue Oscar! 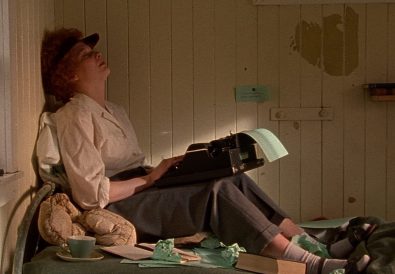