Margita Gosheva stars as “Nadezhda” in this Bulgarian stunner about a teacher’s harrowing fall from grace. Co-Written/Co-Directed by Kristina Grozeva and Petar Valchanov. Not yet seen by Rich. (JLH: 4.5/5)

When we first meet “Nadezhda” (Margita Gosheva), she is in her comfort zone at the front of a classroom. Standing at the blackboard, Nade is teacher as the very embodiment of rectitude. A strong and positive force for good in her community, perhaps Nade is also just a little bit too stern and self-possessed?

Then Nade exits the classroom, leaves the school grounds, and returns home… only to find her entire life collapsing around her.

Unbeknownst to Nade, her husband “Mladen” (Ivan Barnev) has mortgaged the small but comfortable house in which they live with their young daughter. He thought he knew how to make the money back, but his scheme has collapsed, and now the bank is threatening foreclosure within 48 hours.

Outwardly controlled but inwardly seething, Nade goes to see her father (Ivan Savov) who agrees to give her the money, but only if she will make nice to his new wife (a woman who is probably her own age but may even be slightly younger). Unable to humble herself, Nade’s attempts to get the money and save her home become increasingly desperate.

First, The Lesson is a brilliant character study of a woman of considerable talents and accomplishments who has juggling her personal and professional lives, and thinks she has succeeded in “having it all.”

Second, The Lesson is an insightful picture of daily life in modern Bulgaria, a nation that transitioned in the 20th Century from a fascist ally of the Nazis in WWII, to a member of the communist Eastern Bloc during the Cold War, to a market-based economy after the fall of the Soviet Union in 1989. Today, Bulgaria is a member of NATO and the European Union, so everything is fine… right?

Third, The Lesson is a morality tale about the objectification of women who live in countries whose laws were written by men. Let’s start with the triggering incident: Nade is a teacher, so she has a full-time, steady, professional job.  On the other hand, Mladen, her husband, is unemployed. So how is he able to mortgage their home without her signature when her salary is the family’s primary source of income?

As a woman, my heart breaks for Nade because even though she is a teacher–a profession as likely to be dominated by women in Bulgaria just as it is in the USA–Nade does not appear to have any women friends. Now that her mother is gone, it seems Nade no longer has even one woman in her life to whom she can turn. Perhaps just talking the situation through would have helped Nade to cope, but all her conversations are with men–her husband, her father, a local moneylender–and all of them betray her.

Kudos to the co-writer/co-director team of Kristina Grozeva and Petar Valchanov for the relentless narrative drive of their haunting screenplay as well as their spare, elegant execution. In their hands, The Lesson becomes an unforgettable journey to the Dark Side.

NYC Shout-Out: The Lesson opens tomorrow (3/4/15) at the Film Forum on Houston and runs through March 17th. Click HERE for times and tickets.

Bottom Photo: Nade in her comfort zone at the front of a classroom.

Q: Does The Lesson pass the Bechdel Test?

The closest Nade gets to talking with another woman is when she persuades a bank clerk to give her a couple of minutes to make a deposit before closing. This tiny moment of compassion shows what might have been in an otherwise bleak and patriarchal world. 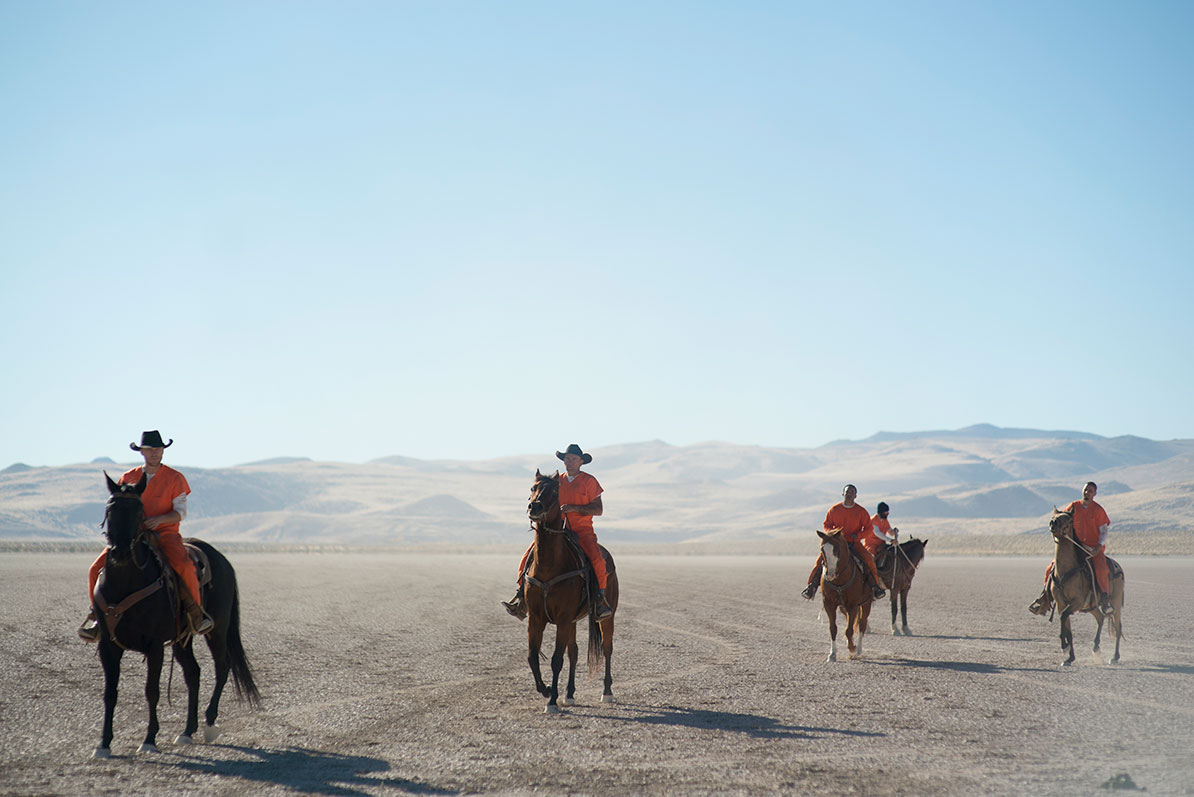 ‘The Mustang’ Exhibits Moving Portrait of a Changed Inmate