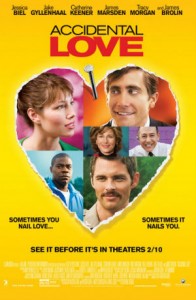 Jessica Biel leads an all-star cast in a comedy flop about a waitress who tries to navigate life and love…  with a nail lodged in her head.

Screenwriting team consisting of Kristin Gore, Matthew Silverstein and Dave Jeser all still have their names attached, but director David O. Russell was somehow able to hide behind the name “Stephen Greene” on IMDb. (BKP: 2.5/5)

What strives to be a comedic political satire is actually a cringe-worthy mess of a film. When rollerskating waitress, “Alice” (Jessica Biel) gets engaged to her screwball boyfriend “Scott,” (James Marsden) a freak accident leaves her with a nail wedged into her head. Surgery? Not an option.

When the emergency room doctors discover that Alice does not have health insurance, they immediately halt the procedure. Instead of helping a person who cannot pay the bills, the doctors throw insults and munch on fast food. The in-your-face political commentary is humorous (at times) but quickly feels like a Saturday Night Live sketch that has run 100 minutes too long.

The most interesting part of the film (written by Kristin Gore, Matthew Silverstein and Dave Jeser) is the endless amount of celebrity cameos. From Bill Hader and Beverly D’Angelo to Kirstie Alley and Catherine Keener, the talented comedians are always a welcome surprise. But with each “celebrity” appearance, the enjoyment dwindles further, with not even brilliant comedic talent able to save the weak script.

Maybe the high expectations of the film’s cast are to blame for the disastrous project that led to original director David O. Russell’s disownment in 2010, and a change to the film’s IMDb page with the director now credited as “Stephen Greene.” Originally beginning production in 2008 (with the title Nailed) the film stayed in distribution purgatory before its eventual release in 2015. Thankfully, the limited release will help ease the blow of Accidental Love’s disappointing turnout and save the cast and filmmakers the embarrassment. 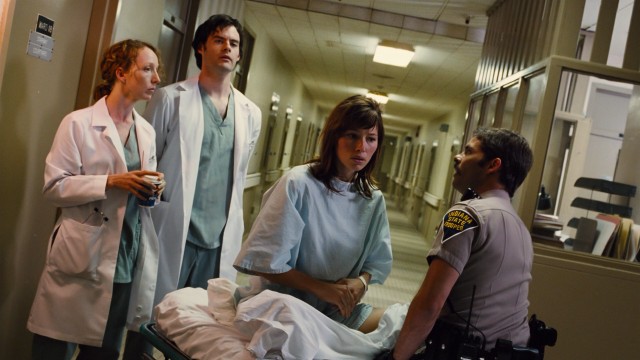 Photo: James Marsden as “Scott,” comforting fiance “Alice” (Jessica Biel) after she is denied surgery from her doctors (with M.D. cameo from Bill Hader).