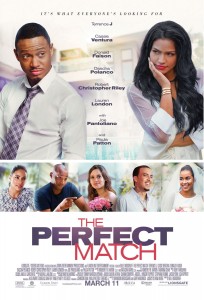 From screenwriters Dana Verde, Brandon Broussard, and Gary Hardwick comes The Perfect Match, a haphazard attempt at a watchable romantic comedy. “Charlie” (Terrence Jenkins) is your typical playboy who insists that love just isn’t for him. That is, until he meets the beautiful “Eva” (Cassie Ventura). But even for a playboy, love is never easy. (JEP: 2/5)

“Charlie” (Terrence Jenkins) is the odd man out among his two best friends, “Rick” (Donald Faison) and “Victor” (Robert Christopher Riley), who are both in the “settling down” stage of their lives. And by odd man out, I mean perfectly happy in his playboy lifestyle.

Rick and his wife “Pressie” (Dascha Polanco) are trying to have their first child, and Victor is engaged to his successful fiancé “Ginger” (Lauren London). Charlie, on the other hand, is a music agent, with an up-and-coming photography business on the side. He’s successful, attractive, and a complete womanizer. Charlie has his rules and he doesn’t break them. One of said rules? No relationships. Ever. 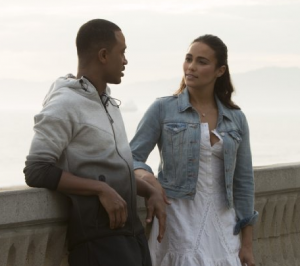 But being at odds with his friends doesn’t last long when Rick and Victor take it upon themselves to get Charlie to settle down. Victor’s wedding is fast approaching, and a bet is in order. Rick and Victor bet Charlie that if he sleeps with only one woman until the wedding, that when the wedding bells ring, Charlie will be in love. Thinking himself incapable of settling down, Charlie doesn’t hesitate to take their bet.

So when “Eva” (Cassie Ventura) walks into the juice shop (yes, juice shop) where these three grown men sit chit chatting about settling down, Charlie locks eyes with her and decides that she’s the one. No, not “the one” one, but the one woman he will be sleeping with until Victor’s wedding. And when he doesn’t get attached and fall in love, he will have proven his friends wrong, effectively winning the bet.

At first Eva refuses him, but eventually she agrees to go out with Charlie, under the condition that things stay casual. Which is, of course, exactly what Charlie wants. But when he begins to fall hard for Eva, everything changes. Charlie begins to reflect on his life and what it is that he really wants, and most of all, he learns that love takes two.

What can I say? The perfect match just isn’t up to par with fellow rom coms. The disrespectful shot vocabulary when female characters were in frame, the soundtrack, the clunky narrative, the dialog, the acting…it was all a mess. I could go on, but I’d rather not. From the very first scene, The Perfect Match disappoints. I wanted to enjoy it, and I gave it a fair shot, but this one I just can’t recommend.

Q: Does The Perfect Match pass the Bechdel-Wallace Test?