The dog-eat-dog industry of modeling got literal in Nicolas Refn’s The Neon Demon (co-written by Mary Laws and Polly Stenham). The cannibalism, the murder, the rape, and that really intense scene where this woman masturbates on a corpse, though not sufficient to prove that the film is indeed a thriller, does confirm the age-old rumor that maybe the modeling industry is not the right place for a young, innocent girl. It is not bad entertainment but The Neon Demon, obviously in need of directions and disciplines, has to figure out what it wants to tell before drowning its audience with metaphors. (PTS: 3.5/5)

The Neon Demon is all about ice-cold, mannequin-like characters and impersonal, high-tech environment: Refn, Laws, and Stenham demonstrate that there’s no space for growth and warmth in a cutthroat business. Thus it comes as no surprise that whomever Jesse encounters either wants sex or death.

The men unanimously prefer the former. Jesse first meets with an amateur photographer, Dean (Karl Glusman) with whom she develops a short-lived and very forgettable dalliance. Then she wins over the men in the fashion industry – an emotionless photographer, Jack (Desmond Harrington) and a hypersexual fashion designer (played by the very charming Alessandro Nivola); both lust after Jesse’s beauty yet never follow through their sordid intentions. It is the manager of the seedy motel that Jesse lives in, (Keanu Reeves) that really comes close.

Interestingly, as vicious as these men are, the women in The Neon Demon are lethal. Jesse’s affectionate and supportive friend Ruby (Jena Malone) turns out to be a necrophilic psycho. Her two robotically perfected model friends – Gigi (Bella Heathcote) and Sarah (Abbey Lee) – who express hostility towards Jesse’s arrival, will proceed to be crazy and jealous throughout the entire film. What does this combination of obsession, necrophilia, mania, and envy lead? Definitely nowhere good. Putting aside the glitches in the narrative (uncanny cameo of a bobcat, the time jumps, and abstract settings), one simply does not know what to think after seeing Refn’s film. Some previous filmmakers who had attempted conceptual ideas, including Kubrick and Bergman, all pin down the emotions they desire to elicit from their abstractions without much wavering. The Neon Demon has a tendency to distract itself by picking up other threads of arguments. For instance, the important point that teenage runaways often fall prey to capital-driven, morally corrupt adults never sticks because the filmmakers jump to Ruby’s necrophilic scene with too much zeal.

The result of such ambition to tell everything is that nothing comes through. Refn mechanically divides his film into sporadic segments like necrophilia, male aggression, and female competition. Not knowing how to connect these ideas together, the filmmaker has to rely on forced transitions (fade) in order to start anew. This editing choice continuously misleads its audience to think that the film is over, creating a disconcerting viewing experience. The more observant audience at least can connect the dots; the ones who doze off for a minute or two will find the film invariably confusing.

However, what does sort of work is Refn’s sense of aesthetics. His frame is obsessed with quotable settings from A Clockwork Orange, including a tracking shot from the beginning that is reminiscent of Kubrick’s opening shot. These overdeliberate images create an eerie tone and inhumane sensibility that works in the film’s favor. However, one does ponder over Refn’s use of geometric shapes. The glowing triangles on the runway, turning from blue to red (signaling the mental transition of Jesse), are a tad old for an avant-gardist.

The Neon Demon, with high commercial values (furnished with a star-studded cast and the director of the successful movie, Drive), is not boring. Nevertheless, with all these emphases on beauty, the film might miss the mark by not questioning the reason for all this madness: is beauty an intrinsic value or a social concept? Because if it’s the latter that bears fault, there’s still hope to restore sanity to the self-afflicting, fame-crazed women who really just need a bit of love. Q: Does The Neon Demon pass the Bechdel-Wallace Test?

The women of The Neon Demon, though never interested in anything beyond their physical appearances, do have a voice. Their exchanges, rarely warm or encouraging, reveal the impossible beauty standards the fashion industry/the society demands of women. 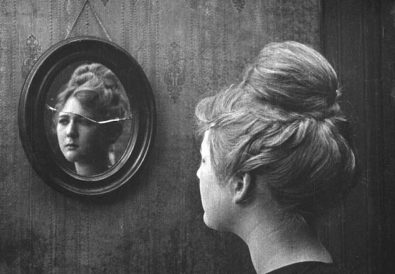