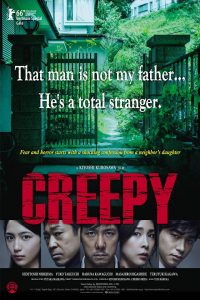 Based on the novel by Yutaka Maekawa and co-written by Chihiro Ikeda and Director Kiyoshi Kurosawa, Creepy will absolutely give you the creeps. It’s brilliant cinematography and near-perfect casting lead to a final product that will have audiences wincing. That being said, the story line drags and isn’t as fleshed out as a 2 hour movie should be. (RAK: 2.5/5)

“Takakura” (Hidetoshi Nishijima) is a young detective who specializes on cases that deal with serial killers and psychopaths. After a close call in the opening scene where an escaped prisoner stabs him, Takatura and his wife, “Yasuko” (Yûko Takeuchi) move to the suburbs. They are enjoying living in suburbia in the quiet beautiful new home they’ve acquired. Takakura has taken a job as a teacher at a local university, where he lectures on serial killers and psychology of deranged people. Although his job bores him, it is a lot safer than his old line of work. Yasuko is having a harder time adjusting to suburban life. She attempts to make friends with their next door neighbors, a strange, but smiley middle aged man named “Nishino” (Teruyuki Kagawa), but immediately senses that he is a bit off. He lives with his daughter, a young girl named “Mio” who avoids eye contact and doesn’t speak with Yasuko. Nishino explains that his wife is very ill.

It doesn’t take long before Takakura’s old work comes back to haunt him. After just a few weeks, his old partner from the police department asks him to take on a case that occured 6 years ago in his very neighborhood. A family of 3 went missing, leaving only one daughter behind. Even though Takakura accepts the case, the daughter will not admit to anything for the longest time. 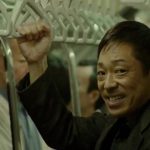 It doesn’t take long for the audience to be clued in that Takakura’s new neighbor, Nishino is likely linked to the case. But everything becomes more complicated when Mio catched Takakura on his way home and confesses that Nishino “is not my [her] father. He is a total stranger.” While Nishino becomes more and more taken with Yasuko, things become more dangerous for Takakura and Mio. Takakura always knew there was something wrong with Nishino, but what he finds is far more disturbing.

Even with all the excitement, gore and creepy feelings, this film stretched on for two long. A story that could have been compacted into 1 hour and 20 minutes dragged on and on. That being said, the cinematography was brilliant. Slight changes in tone and mood affected entire scenes. There are multiple memorable shots that could pit for most iconic shot of the film. The character of Nishino is excellently developed from a shy neighbor to the creepy deranged stalker, and credit should be evenly split here both between writers Ideka and Kurosawa, and the actor, Teruyuki Kagawa. All of his dialogue is brilliantly composed, but without his signature creepy smile that is both sweet and maniacal, Nishimo would not come to life. 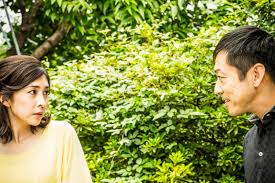 Bottom Photo: Nishimo attempting to make Yasuko like him.

Does Creepy pass the Bechdell-Wallace test?

In the creepiest part of the film, Yasuko finds Mio stuffing her mother’s body into a plastic bag and vacuuming the air out….at which point they have a short-lived conversation that definitely doesn’t focus on any of the men, but rather Yasuko’s shock.