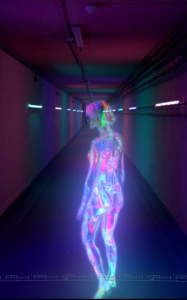 Elizabeth Morris and her co-writers create a futuristic nightmare in Let’s Be Evil, a desperate attempt at an allegorical warning to today’s technology obsessed-society. (GEP: 2.5/5)

Kids have smartphones now. Said smartphones are slowly depreciating their already-limited social skills. We know this. The news reminds us almost daily that our growing reliance on technology is harming us more than helping. We don’t need a busy, in-your-face allegorical film to remind us, too.

It would be one thing if the film was somehow different, or sent its message subtly and meaningfully. But the very heavy-handed Let’s Be Evil doesn’t, and it starts with the opening sequence of a pundit on a news show yelling about how kids are fat and uneducated because of their screens. Not exaggerating – fat and uneducated. Great start.

“Jenny” (Morris) is a young woman desperate for income to help her sick mom pay the bills. She soon enters the Prosperity Project, a virtual reality simulation in an underground bunker that claims it will “save the country’s future” by training children in advanced science, technology and even combat. There are fancy screens and goggles, eerie robot voices that call out intense rules about “breaking protocol” and other super-scary stuff that attempts to prove how advanced this technology is and what it is capable of.

Jenny and her new cronies are assigned the task of supervising the gifted children subjected to the Prosperity Project’s training. The supervisors quickly learn that the kids are essentially imprisoned, never allowed to go outside or even socialize. They impart nuggets of wisdom like “learning should be fun” and attempt to interact with the kids on a personal level in order to help them be social, but it quickly backfires. Morris and her co-writers obviously don’t actually believe that kids of the future won’t even be able to speak because of their technological reliance, but their use of hyperbole is incessant and overused throughout the 80 minutes. This only gets worse in a plot that predictably twists when the kids take over the facility.

The underground setting is effectively dark and claustrophobic, adding to the eerie, cold tone of the Prosperity Project and everything it stands for. At times, it’s painful to watch because it’s supposed to be, but then the blatant dialogue comes along and any instilled fear quickly evaporates.

Today’s kids have Alexa and Siri to answer questions they used to have to TYPE INTO GOOGLE *gasp*, or worse – actually look up in textbooks and encyclopedias. It sucks, but it’s reality – we don’t necessarily need Morris and director Martin Owen’s version of this robot (Arial – Augmented Reality Information Advanced Learning) to freak us out about it when we have almost daily stories of identity theft and hacking to scare us already. We already know our operating systems with female voices don’t have feelings, but somehow, Let’s Be Evil feels the need to remind us that Arial doesn’t have emotions, and “isn’t that sad?” (Direct quote.)

While Let’s Be Evil is a valiant effort to stave off our reliance on technology, it would’ve played better on paper. Imagining this underground world of incessant screens and futuristic high-tech communication might make the message more meaningful, or at least, less painful to sit through. 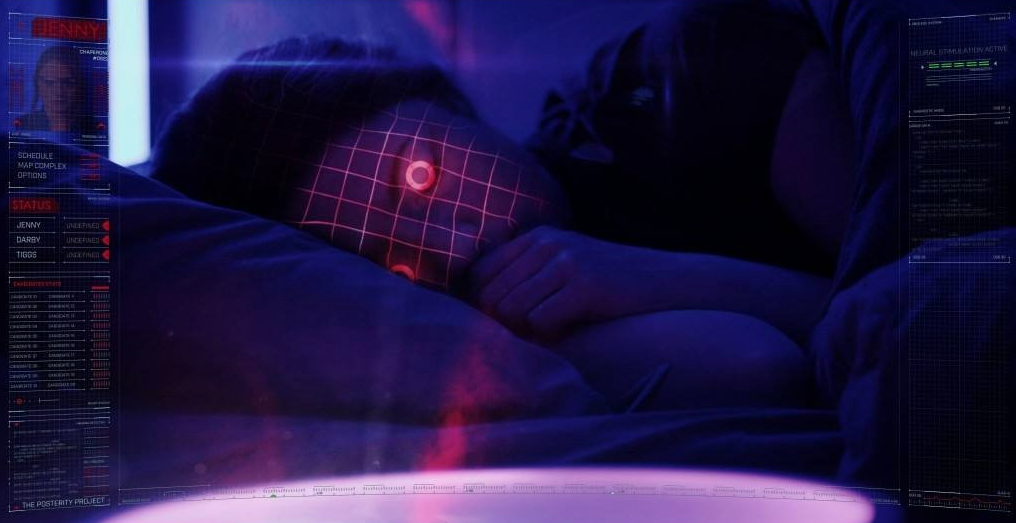 Top Photo: ARIAL is this allegory’s version of Siri or Alexa, an all-knowing but unfeeling operating system.

Middle Photo: Jenny is desperate for money when she joins the Prosperity Project.

Bottom Photo: The digital takes a turn for the worse in this creepy, overworked sci-fi thriller.

Q: Does Let’s Be Evil pass the Bechdel-Wallace test?

Yes. Jenny and her fellow supervisor “Tigs” talk about their lives, and Jenny attempts to bond with one of the young subjects at the Prosperity Project.

by Brigid K. Presecky January 8, 2017
Brigid Presecky began her career in journalism at Chicago's Goodman Theatre. In 2008, she joined FF2 Media as a part-time film critic and multimedia editor. Receiving her Bachelor of Arts degree in Communications from Bradley University, she moved to Los Angeles where she worked in development, production and publicity for Berlanti Productions, Entertainment Tonight and Warner Bros. Studios, respectively. Returning to her journalistic roots in Chicago, she is now a member of the Chicago Film Critics Association and certified Rotten Tomatoes Film Critic.
Previous Post Next Post