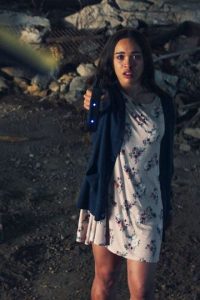 Written by and starring Cleopatra Coleman, Hover is a dystopian film set in the near future. A drought has caused serious food shortages, and technology has advanced so much that it now acts autonomously. Despite flaws in the plot and technical execution, Hover taps into the fears that are ruminating in the back of our minds as technology advances more and more. (JRL: 2.5/5)

Claudia (Cleopatra Coleman) and her partner John (Craig Mums Grant) travel around rural farmlands on business. Their company is called “Transitions,” and their work is to help a growing number of sick people end their lives peacefully. Because of a devastating drought, farms have begun to languish and the company “Vastgrow” is selling drones to try to maintain what’s left of the crops.

When John dies suddenly, Claudia is left baffled by his death. She has a sense that she’s being followed, and a suspicion that the two mysteries may be connected. At the funeral of one of her clients, Claudia meets Joanna (Beth Grant). Joanna and her son Isaiah (Shane Coffey) claim to be “the good guys,” but it’s still unclear what battle they’re fighting.

As Claudia begins to solve the mysteries that bother her, she realizes that Vastgrow’s new technology that’s “protecting” dying crops may not not be as heroic as it sounds. Claudia teams up with Joanna and Isaiah to fight the elusive powers behind it.

Hover does a good job of making its events feel plausible and within the near future, and the effect is certainly frightening. The setting is eerily similar to the current world, the only difference being that the gadgets are slightly more advanced and everything else is a bit more run-down. The fact that the world of Hover is so recognizable and familiar to us makes its events feel entirely plausible and near. Hover’s world also includes things like smartphones and self-driving cars, the rise of which we have all experienced, which adds to the feeling that today’s explosion of technology could have terrible implications in the near future.

The idea behind Hover is excellent, but the execution doesn’t quite match it. The music, meant to bolster the suspense of the film, is clumsily melodramatic, and because of that it is distracting at times. The acting, while not terrible by any means, is at times overdone.

The film also touches on several serious topics such as suicide, unwanted pregnancy, grief and loss, but does not allow these topics sufficient respect. The fast-paced plot is the priority. While these heavier subjects may have been included to bring more humanity to the film, it’s probably better not to include them at all if there isn’t time to do them justice.

It feels like film is just trying to do too much at once in terms of plot, and because of that certain seemingly important plot points and character relationships feel undeveloped. For me, the over-complicated plot, the music and the acting made the film less effective in delivering what should be an incredibly powerful message.

Flaws aside, Hover makes you think twice about the way things are going (and rightfully so). If anything else, Hover is an example of an artist using media to fight the wrongs she sees in the world and to push humanity to save itself, and that will always be admirable.

HEART OF A DOG