Documentarian Shraysi Tandon illuminates the horrific condition of child laborers in developing countries. It will be hard for the audience to go back to their lifestyles of cheaply-manufactured clothing and plastic goods after Invisible Hands shows them about how those products got to the marketplace in the Western world. The ending of this film takes an odd turn, though, because its projection of the future of this issue seems unrealistically optimistic. (GPG: 3/5)

Referencing Adam Smith’s idea that capitalist markets produce the best outcomes for everyone in society without visibly forcing anything to happen, Invisible Hands thoroughly refutes its namesake’s thesis. The child laborers in this film are enslaved everywhere from Indonesia and China, to the United States itself. Viewers under the impression that the United States treats its children more humanely than developing countries will be shocked to hear the stories of middle-school age tobacco pickers who absorb enough nicotine through their skin to vomit repeatedly at work, and in some cases have to go to the hospital from the toxicity. One such child tells the camera that her boss told her to keep working when she vomited at work the first time, because “it happens to everyone.”

Invisible Hands is a film that everyone who shops at stores like Target, Walmart or Walgreens should see. People who buy fashion items like Revlon or Maybelline makeup, clothes from major outlets like H&M, and purses from brands like Chanel and Coach should check it out as well. People who own smartphones should also make a point of seeing this movie. You should especially see this movie if you buy products made with cocoa powder. You get the idea. Invisible Hands will show you that Western “free-market” capitalism comes from a substantial part of the global population who is not in any sense free. Despite its informative exposition of child labor driven industries, the ending of Invisible Hands is baffling, because its optimism about this situation seems completely disconnected from what the rest of the movie shows us. The ending tells us about various consumer movements that have gotten certain companies to discontinue use of child laborers, especially Apple, which has cracked down on child labor in its factories in China. The emphasis is squarely on the improvements being made, even though compared to the scale of the problem shown in the rest of the film these changes are clearly infinitesimal in the scheme of things. It almost seemed to me like Ms. Tandon didn’t want the movie to be a downer, and added in this light ending so that Western audiences wouldn’t be too depressed after seeing it.

I don’t think this strategy for the ending was the right move, because to give audiences the absolution of these few small acts of progress risks letting them forget the main message of the film—the sheer saturation of Western markets with goods produced through child labor. Apple might be doing the right thing due to consumer pressure, but one main point the film makes is that the entirety of Western capitalism depends on child labor and other forms of slavery to prop up consumerist culture with cheap commodities. Small changes to a system that is quite literally synonymous with slavery will not solve this problem, despite what the (probably quite affluent) viewers of this film might like to believe.

Not really, because as a documentary there are not any scenes with conversations between women like in a fiction film.

Bottom Photo: Child laborers with the produce they collect.

IN THE SHADOW OF WOMEN 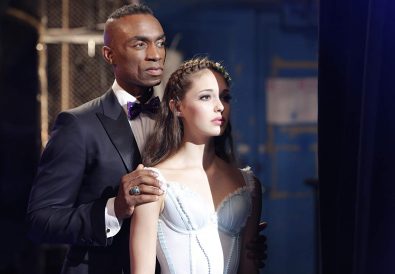 ‘High Strung Free Dance’ is High Stakes Only With its Dance

by Giorgi Plys-Garzotto November 20, 2018
Giorgi Plys-Garzotto is a journalist and copywriter living in Brooklyn. She especially loves writing about queer issues, period pieces, and the technical aspects of films. Some of her favorite FF2 pieces she's written are her review of The Game Changers, her feature on Black Christmas, and her interview with the founders of the Athena Film Festival! You can also find more of her work on her website!
Previous Post Next Post