‘Honeyland’ is Stunning, Heartbreaking, and Bee-Wildering 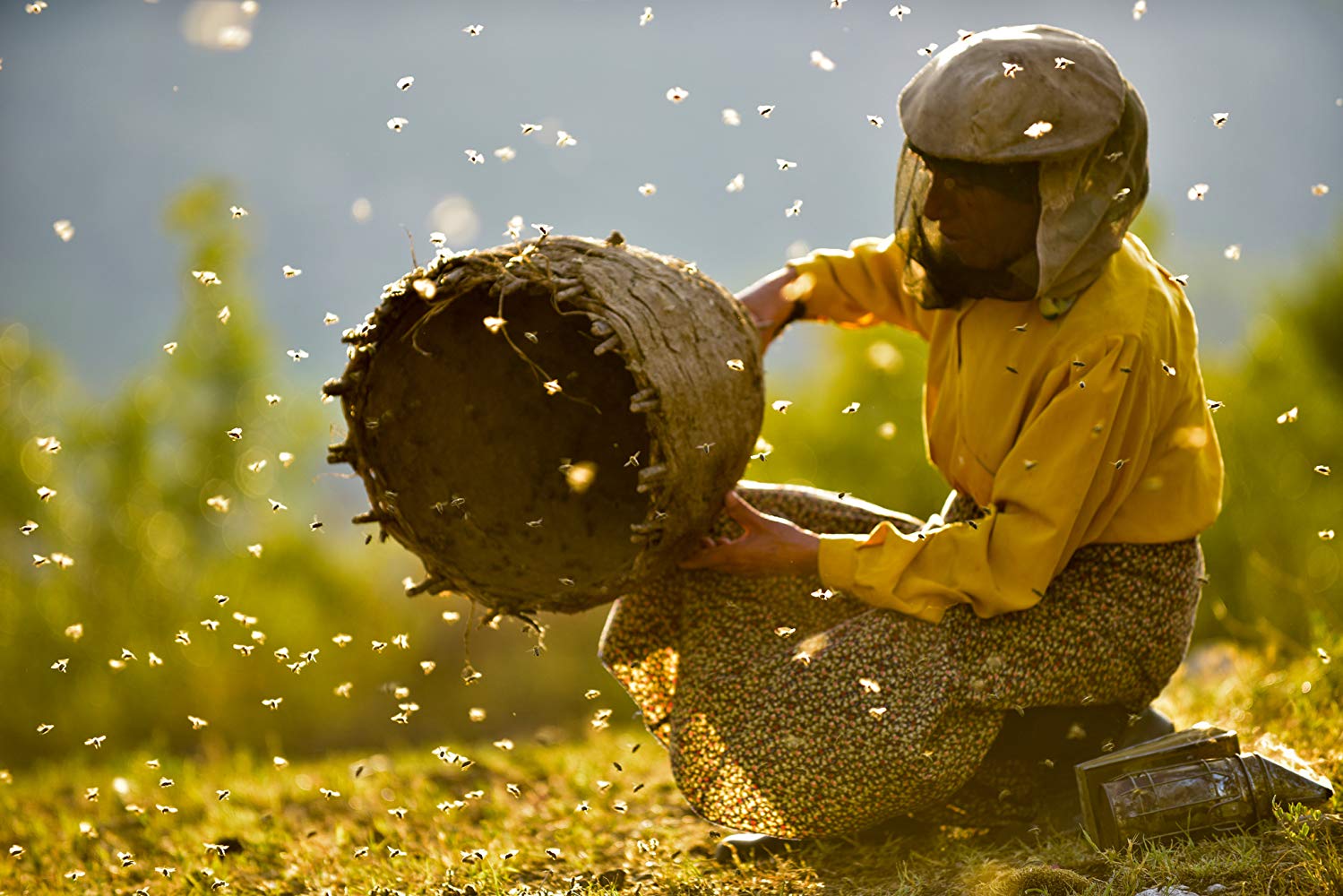 Directed by Tamara Kotevska and Ljubomir Stefanov, Honeyland is an observational documentary that brilliantly follows the solitary indigenous life of Hatizde Muratova, the “last female beehunter in Europe,” as she attempts to maintain her bee colonies and care for her ill mother. (DLH: 5/5)

Honeyland is the most visually striking film I have seen all year. It begins with sweeping establishing shots of Hatizde climbing through the mountains of Macedonia on her way to monitor a bee colony carved into the cliffs. Honeyland establishes an immediate sense of intimacy with Hatzide in these first few scenes as we watch her lovingly tend to her bees (bare-handed!) and trek through a crumbling and mysteriously empty village back to her hut.

Honeyland shows rather than tells that Hatizde lives alone with her 85-year-old sick mother and tends to her bees every day. The film relies on visual elements rather than dialogue to tell the majority of the story, which emphasizes the power of Hatizde’s way of life. Despite the loneliness of her situation, this silence underscores her love of nature and intimate relationship with her mother perfectly.

It would have been enough for me to watch a full-length film that followed Hatizde around the mountains and abandoned village, collecting honey and singing to herself. But, considering Honeyland is a documentary and Hatizde’s life amounts to more than wandering around the plains, we follow her to a crowded marketplace where she sells her honey and trades for food and luxury items to bring back to her mother.

Seeing Hatzide through the market was alarming after spending the beginning of the film in the village. Customers

and vendors shuffle around her, talk to each other, buy and sell, and most notably, wear modern clothing. These elements seem to firmly place Hatizde’s story in the center of a modern world despite her ancient way of survival. This scene was absolutely essential in that it reminded viewers that Hatizde’s story and livelihood are not completely separated from ours. People like her still exist and continue to thrive despite the spread and bustle of modernity.

Honeyland really picks up the pace when an RV packed with a husband and wife, seven children, and a herd of goats and cattle rolls into Hatizde’s village one afternoon. It is at this point that Hatizde is thrust into an interesting situation; there are people to talk to, children to play with, and the father of the family (Hussein Sam) to teach about her ways of beekeeping. It is through her interactions with the Sam family that we learn the most about Hatizde and her art. Her gentleness and playfulness emerge in full force when she is fortunate enough to be surrounded by other people.

Unfortunately, with the arrival of the Sam family also comes immense conflict over shared resources. When the Sam family begins to raise their own bees, Hatizde’s livelihood is immediately threatened by abuse of natural resources.

It is almost unfathomable that the filmmakers were able to catch such a perfect conflict during the shooting process. Honeyland watches exactly like an excellently executed fiction film (observational documentary tends to trick us) and manages to remain grounded to Hatizde’s best qualities throughout. Honeyland does a splendid job of portraying the love between mother and daughter and a way of life that seems so foreign to most of us now. It is charming, heartbreaking, and the best film I have seen in a long, long time.

Top Image: Hatizde after coloring her hair with a box of dye. “Everyone needs to feel beautiful sometimes,” she says to her mother.

Bottom Image: Hatizde and the Sam family bonding over a radio.

Does Honeyland pass the Bechdel-Wallace test?

Yes. Hatizde often speaks with her mother about food, the neighbors, and her dedication to taking care of her. These are some of the most intimate and emotional moments of the film.

It is important to acknowledge that, as with every observational documentary, the ethics of filming such a situation are called immediately into question. The filmmakers do not intervene at all and film extremely emotional and private moments of Hatizde’s life. While she did give her consent to be filmed for the three years that the process took, one might wonder about where the line should be drawn.

The filmmakers have mentioned in multiple interviews that they have set up a donation fund to provide Hatizde with a house in a neighboring village where her brothers live. They have also purchased the Sam family a new vehicle.

by Dayna Hagewood July 23, 2019
Dayna graduated from Rutgers University in May of 2019 with a degree in English and Cinema Studies and a concentration in Creative Writing. Dayna loves working with FF2 Media because writing about film harmonizes her greatest interests and allows her to participate in showcasing women artists doing amazing work. As a writer, film buff, and avid cross-stitcher, Dayna appreciates that FF2 carves out a space for women artists in an industry so unwilling to lend one to marginalized groups. She is proud to aid in creating and facilitating that necessary space.
Previous Post Next Post