Lesley Chilcott’s documentary Watson is not a Sherlock Holmes adventure, but it is just as exciting and mysterious as you’d expect one to be. Instead, Chilcott is focusing on a man named Paul Watson who has spent over four decades fearlessly protecting sea life. This film is as educational as it is entertaining–discussing the morals, laws, and consequences of humans interfering with the ocean. (CPG 5/5)

Growing up, Paul Watson’s abusive father would take him fishing. It made a huge impression on Watson that his father would catch tons of fish, then only keep the best ones and leave the rest, dead. That experience did not sit right with Watson; he says he always saw fish as being the same as any other animal. In his free time as a child he enjoyed swimming in the river, and he says he spent an entire summer with a group of beavers. These experiences are what led to Watson dedicating his life to protecting the animals of the sea.

Watson went on to study sea life as a young adult, believing every sea creature is deserving of protection. He notes how whales in particular are social and intelligent creatures. These huge mammals have an additional cortex in their brain, that no other mammal has, that is for thinking and emotion. Beyond the individual lives of the animals, the ecosystem of the ocean makes it possible for life on earth as we know it. Fifty to eighty percent of our oxygen comes from the ocean, and without it humans probably could not survive.

Starting off as a member of Greenpeace International, he formed his own organization, The Sea Shepherd Conservation Society, when his tactics were seen as too extreme and daring for Greenpeace. Watson is firm that he would never hurt others in his attempts to protect the sea life, he seeks only to inhibit their actions. It is tragic seeing that Watson’s dedication is seen as going “too far” by some because of our profit driven society. Watson is portrayed as a hero in Wilcott’s film, and clearly deserves such a title.

Watson seems to have no fear of death, which allows him to do things like stand on shaky ice in front of a huge ship to stop it from getting to an endangered species of seal. He says a near death experience as a child gave him this ability. Risking his own life for such a worthy cost is beyond inspiring. 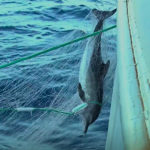 Chilcott’s film is eye opening to the horrors that take place everyday on the ocean. Shark fin is a particularly expensive commodity, so fishermen will catch sharks, cut off their fins while the shark is still alive, then throw the body back into the ocean to let the shark bleed to death. (Don’t watch this movie with dinner–there is a lot of blood shown throughout!) These are things we would never do to creatures on land, Watson says.

The cinematography in Watson is simply stunning work. From gorgeous, serene underwater shots to intense, close up action moments, it is all done incredibly. I would highly recommend this film because you not only are entertained throughout, but you learn a heck of a lot.

Does Watson pass the Bechdel-Wallace Test?

Unfortunately, it does not. The only women mentioned are in relation to Watson.

Watson makes an excellent point in this film, which is that profit is held sacred by our society while life is considered expendable. The whales he protects are being directly and indirectly slaughtered because the ability of corporations to profit off their deaths is considered more important than their right to live. This film is in many ways about the world of profit versus the world of life, and how their logics are so totally at odds with each other. Any person who spends most of their days either in fluorescently lit offices or standing for hours on end at a customer service job will probably know the feeling of being an organic creature being forced through the woodchipper of capitalism. It is easy therefore, to empathize with these whales and cheer on Watson for saving them (and us?).

This movie is about the paradox of direct action–Watson is saving the only planet we have to live on, benefiting the vast majority of humans on Earth. However, he is also impeding the ability of corporations to make money, therefore breaking the law. The point of direct action is to show how a society where basic morality is against the law cannot be just, and this film shows that truth for everyone in the audience to see. Lesley Chilcott was also involved in the making of An Inconvenient Truth, so she has been involved with environmental activism for some time, but like many of us it seems that she has more urgency in 2019 than in the mid 2000s when Al Gore’s movie came out.

by Carlotta Plys-Garzotto November 8, 2019
Carlotta Plys-Garzotto was born in Chicago and attended acting and drama therapy school in New York City. She recently relocated to Los Angeles to try out the film industry. Carlotta has always been drawn to the arts whether it's visual, writing, theatre, or film. She has recently been taking improv classes at Upright Citizens Brigade. Carlotta is a Leo with an Aquarius moon. She loves making music videos, eating ice cream, and traveling.
Previous Post Next Post