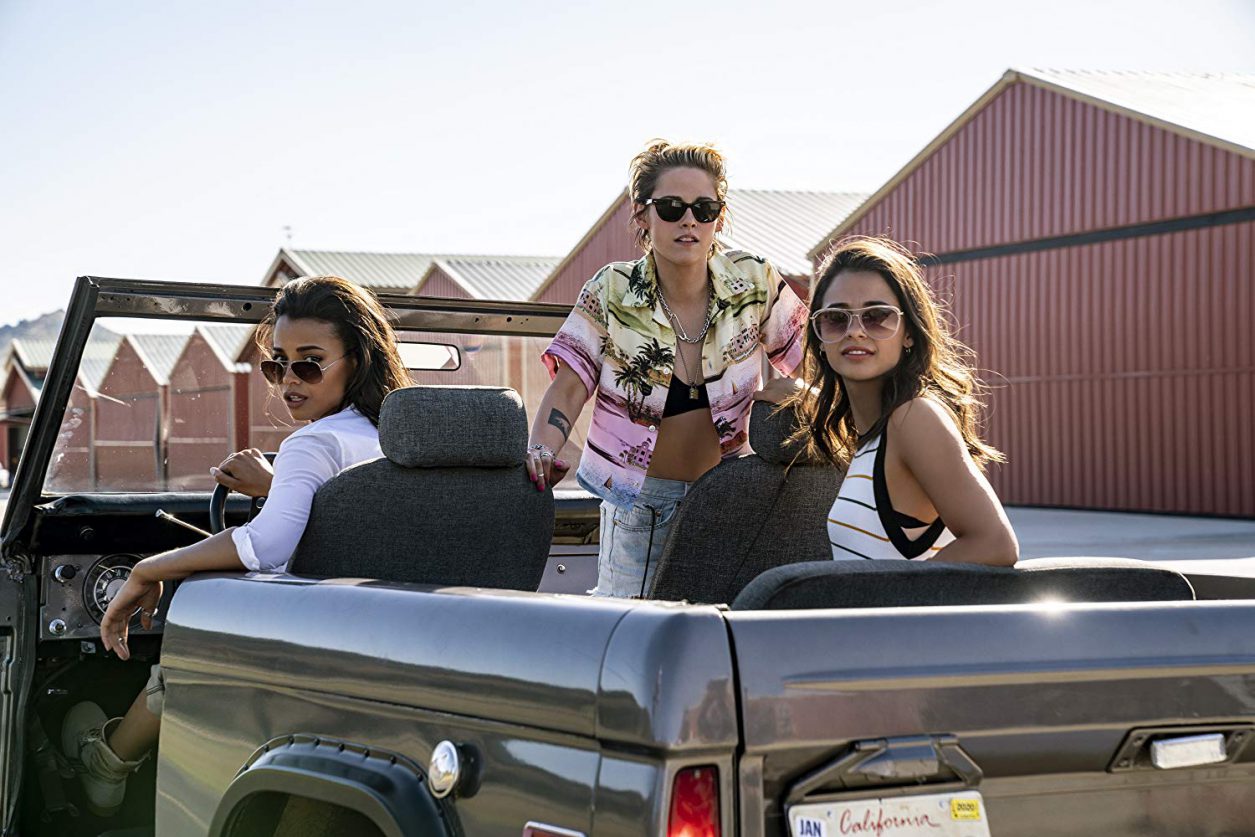 Director and writer Elizabeth Banks’ new film Charlie’s Angels is the next installment of female dominated secret network of spies who save the world. This film empowers all women of any age to be independent and unashamed if their power. (SYJ: 4.5/5)

Charlie’s Angels begins with an intimate, stunning close up on “Sabina’s” (played excellently by Kristen Stewart) face, flirting with her date. “Australian Johnny” (Chris Pang) spends the evening demeaning her, telling her where a woman belongs and what jobs she should do. Sabina giggles and disagrees, coyly. While playing footsie with her date, she discreetly wraps a curtain around him, playing it off as a sexual move. In this opening scene, Sabina plays into the cliche female stereotype (where women play weaker and more helpless roles), using it to her advantage. Before long, she captures Australian Johnny, along with his extensive bodyguard team, with the help of “Jane” (Ella Balinska) and her own team of female agents. Come to find out, The Townsend agency that they work for consists of separate teams of female spies around the world. Each team is assigned a “Bosley” (including Patrick Stewart, Elizabeth Banks, Djimon Hounsou) — the pseudonym used for the operation leader. A year later in sunny Los Angeles, all the Bosleys, in person and digitally, meet to throw one of the Bosleys (Patrick Stewart), a retirement party. He was commended for his global expansion of the Townsend Agency.

In a company owned by “Alexander Brock” (Sam Claflin), based in Hamburg, there is a search for renewable and safe energy. An engineer on the project, “Elena” (Naomi Scott) finds out that this energy can, in fact, cause serious harm. She offers to make a small adjustment to decrease the danger that the product can cause. However, her boss “Peter Fleming” belittles her intellect and refuses to take her seriously. On her way out of the unsuccessful meeting with her boss, she bumps into another worker who hands her a business card with the name ‘Townsend Agency’ written on it. Knowing that the product she created could be globally dangerous, she seeks out the agency to try to uncover the truth and expose the Brock company. In a cafe, Elena meets with another “Bosley” (Djimon Hounsou) to discuss this secret matter. Little does she know, both Jane and Sabina are there too, undercover, working together to protect Elena. Thus begins the main plot of Charlie’s Angels.

Elizabeth Banks’ new Charlie’s Angels is a beautiful piece of female empowerment. Ranging from young girls to older women, Elizabeth Banks’ choices seem to encourage and promote strength, independence, and female solidarity. The upbeat music used in the soundtrack added to the fearless and brave attitude that Charlie’s Angels maintains throughout. It seamlessly complements the themes of the movie and is fun to listen to as well as to watch. Charlie’s Angels demonstrates that sexism and misogyny can be used as an advantage given the right circumstances. It expertly debunks stereotypes and assumptions that women cannot be action stars or master physical combat. Charlie’s Angels is a non-traditional action film sprinkled with humor that is very pleasant and enjoyable to watch. All in all, Charlie’s Angels is a good film to watch, so grab your friends and get to the theater for this one!

A: Yes, the spies discuss engineering.

With a new cast of actors and a fresh perspective, Charlie’s Angels emerges as a powerhouse of female solidarity, action, and pure entertainment. I was not expecting to enjoy this one as much as I did. Kristin Stewart is absolutely stunning as Sabina and deftly brings her usual spunk and angst to the role. The relationships between the main angels are well-developed, and these characters feel real despite the unbelievable situations they manage to get caught up in. I have already recommended this one to most of my friends and I’ll continue doing so. In fact, I wish this type of film could replace 95% of the action-thrillers on the market. It’s got the perfect amount of nostalgia, suspense, and downright badassery.

by Sophia Jin November 14, 2019
Sophia is currently a student of classical music. She joined FF2 Media in 2018, and loves working with everyone on the team because not only does it promote women's roles in films, it also opens her up to more works done by women. Sophia is so glad that there is a space that is full of women alike in their passion to bring more attention to females who are just as capable or even more capable than men in the industry.
Previous Post Next Post