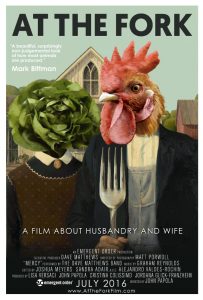 From husband-wife team John and Lisa Papola, At The Fork is an educational documentary about the exploitation of farm animals and the disconnect between these “living, thinking beings” and the meat on our plates. The film’s strengths lie in information provided by its featured farmers and less in its saccharine attempts to evoke sympathy in its viewers. (GEP: 4/5)

The Papolas’ approach to documentary is refreshingly different: rather than having the viewer guess at the family’s dynamic and approach to food, John tells you point blank: he is a meat-lover, while Lisa is a vegetarian with great respect and appreciation for animal life.

The Papolas visit a variety of farms and confinement buildings, caring for countless animals along the way. They simultaneously learn about the sometimes-painful process of farming animals that will ultimately end up in grocery stores and on tables nationwide.

Featured farmers provide the most interesting insights into the moral dilemmas of farming – most of them struggle with animal welfare as much as knowledgeable consumers do. With these fascinating profiles of empathetic farmers who ultimately need to make a profit, an animal story quickly becomes a human story. Some of the farmers’ justifications for the poor conditions in which these animals live are laughable (one farmer, in particular, pokes his pigs with a prod and yells “come on, chubby,” which is so unnecessary and bizarre that it’s almost amusing). Mistreatment of the animals is cringe-worthy, until you remember that you condone it by purchasing and eating them.

To their credit, the Papolas also feature farmers who are working to provide better living conditions for these creatures. One of the most endearing agriculturalists explains that he is happy to provide comfortable open plots for his sows, but that consumers must understand this will come at a cost. In addition, the filmmakers admirably tackle both sides of the conversation by portraying the difficulties of being a modern-day farmer. They concisely explain the role agriculture plays in the economy and how important it is for small farmers to stay afloat, an education animal-lovers and meat-eaters alike might not get elsewhere. The farmers’ perspective becomes just as important as the animals’.

Information like this is what makes At The Fork work. Logos arguments that appeal to the viewer’s sense of logic and scientific information provoke much more sympathy for farm animals than the emotional, slow-motion attempts to make us feel sorry for them. (I.e., one animal advocate’s statement: “Most people don’t have the opportunity to get to know a cow!”)

At one point, the filmmaker looks a pig in the eye and says, “wow…very human-looking eyes.” The camera slowly pans into John’s frowning face as he climbs into a pig gestation crate in which pigs are housed. Moments like this are edited in such a way that they become unintentionally amusing because of how overly dramatic they are – images of the pigs confined in these crates would suffice. John and Lisa even have uncomfortable arguments over meat-eaters’ lack of compassion on camera, making obvious statements that could have easily gone unsaid.

There are no extreme “meat is murder!” moments, which makes the arguments more credible and compelling. While some of the Papolas’ interactions with the animals are drawn out and overly emotional, the fact-based narrative provided by the farmers in At The Fork will inform viewers about the American farm system and the unfortunate conflict between animal welfare and the consumer market.

Middle photo: John and Lisa have different perspectives on the treatment of farm animals – he is a self-proclaimed “omnivore” while she is an adamant vegetarian.

Bottom photo: The Papolas on one of many farm visits.

Q: Does At The Fork pass the Bechdel-Wallace test?

No. The farmers are predominantly male, but well-known animal scientist Temple Grandin is one of the most knowledgable and eloquent talking heads in the documentary. 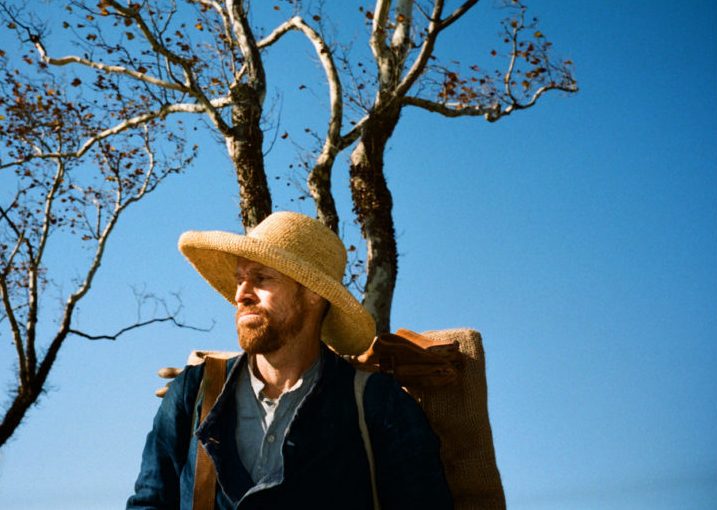 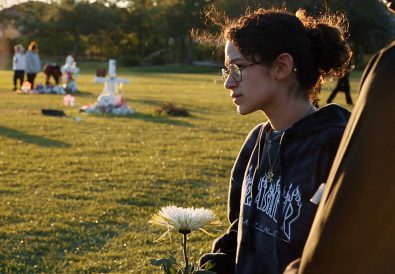